I know it has been a very long time since my last post! I've decided we either live very boring lives or we are so busy that I can't ever find time to tell you about everything. So here's the latest (I can think of) in the Baier House!!!
Bryan and I were married on April 21, 2000. We were so young and so clueless and we had a baby on the way. So many things could have gone wrong and it's sad to say that it most cases they do, but on April 21, 2010 we celbrated 10 wonderful years of marriage. Just 2 months before this we were hit with something that neither of us expected. It stopped us in our tracks for a few weeks. I believe several times over the course of those weeks the vows we had said came back to us over and over again. Through sickness and health??!! Wow were those times tested. But not once did we doubt our love for each other and more importantly the love God has for us! Through surgery and then the dreaded waiting came for resluts God knew all along the outcome!! What we thought in the beginning to be the worst case scenario God knew would turn out to be nothing at all. I am so glad that we trusted him and gave it all to him during that time. Over the last 10 years we have had to do that many times and I am so thankful that we do have that relationship with him and that we put him in complete control of our lives personally, our marriage relationship and our children's lives.

During the week of April 19th - 23rd we went on a 7 day Cruise to the Carribean. It was just amazing. We had such a wonderful time together and enjoyed every island - Jaimaca, Grand Cayman Island and Cozumel. We created so many memories! I hope we can do this again very soon. It was just a great week - just the 2 of us - to reconnect. It's not often in any of ours lives that we can spend just one on one time together with our spouses. It was long overdue for us and I am so glad that we were able to have that together time!!!
Here are a couple of pictures we had taken on the boat. I will post actual pictures from the islands later (I promise)! I might even try to tell you a little bit about them!! 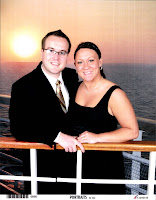 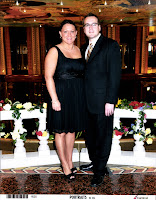